If you are looking for an ancient village to visit during your Hanoi tour package, do not miss Chang Son – a village famous for hundreds of traditional crafts such as carpentry, paper fan making, printing trade,…However, two of them are the most famous – the carpentry and the paper fan making.

Chang Son is a commune in Thach That district, Hanoi, the commune is located about 3 km south of Lien Quan district, 30 km northwest of Hanoi. During the Hanoi tour, this is a traditional village in Vietnam attracts the most tourists. It borders on Thach Xa commune in the East and South, Can Kiem, Kim Quan and Lien Quan communes in the West; Huong Ngai and Canh Nau communes in the North. The commune is approximately 2.5 km².
Formerly known as Nom ancient name is Chang village, is said to originate from the name of an ancient carpentry tool is a chisel, Chang Chay. Later, the village was called as Chang Thon based on Sino-Vietnamese, and then Chang Son as today. 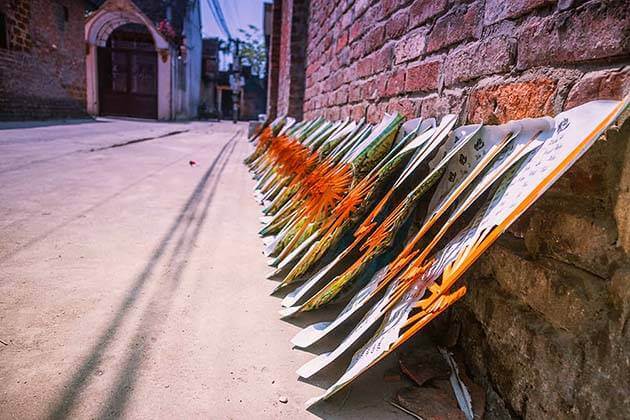 Chang Son is a commune with many people, few fields, so the main economy of the commune is not from farming but from the secondary occupation, in which carpentry and paper fan making is the main occupation. In the past, Chang Son was famous as “hundred of crafts”. There are many unique crafts such as carpentry, paper fan making, sculpture, ancient wooden houses, masonry, painting …
The skill of the Chang Son craftsman also saves on a number of famous works of Vietnam such as the wooden architecture of Tay Phuong Pagoda, 18 Arhats statues of Tay Phuong Pagoda, and the Temple of Literature …

It is known that Chang Son is one of the oldest craft villages in Vietnam, where the most famous profession is carpentry. This land is the furnace for the birth of the couch, the 9m wide fan was displayed at the 2008 Hanoi Flower Fair and was included in the Guinness Book of Records …
But nowadays, even elderly people and craftsmen are not aware of the origin of the village craft. Elders in the village said that the carpentry of Chang Son has existed since the reign of King Hung Vuong. In the next life, whenever there are construction works or remodeling royal palace, tombs, temples, the kings convened the carpenter of Chang Son village.
Only skilled, skillful and careful artisans of Chang Son village can carve the elaborate and sophisticated pattern to meet the aesthetic needs of the most sophisticated and fastidious king. It is from the 16th century, the reputation of the Chang Son craft village has gone far, some artists have been invited to China to build the palace, tombs under the Minh and the Thanh Dynasty. That is the confirmation of carpentry here has long, at least from the 15th – 16th centuries.

Over thousands of years of existence and development, Chang Son carpentry village today is no shortage of talented craftsmen can make such great works. The products of the villagers made, no longer for the kings anymore but for sale to the customers from the most popular to the most sophisticated customers. With the development of science and technology, now the work of the carpenters of Chang Son village has somewhat less heavy, higher productivity.
Visiting Chang Son Village in Hanoi local tours, visitors can comfortably choose their household products with different materials. It is more convenient for customers to bring samples to the village and ask the carpenters to produce the product with materials that you love at a reasonable price.
Chang Son village was recognized by the Vietnam Handicraft Village Organization as “Vietnam typical traditional craft village”. Chang Son now has hundreds of establishments, households producing and carpentry trading. Coming to the Chang Son village, you can clearly see the busy working atmosphere of one of the famous carpentry villages in Vietnam.

Chang Son was introduced as a typical village in Vietnam with traditional carpentry and a place to attract tourists during the Hanoi vacation. Chang Son village is also known as one of the cradles of the paper fan making, with a history of hundreds of years.
Coming to Chang Son, visitors can easily see countless fans are exposed along the small alley in the village. When entering the house of the fan makers in the village, visitors feel like straying into a colorful art space. Photographers often visit the village to capture beautiful moments in Chang Son with colorful fans. As early as the 19th century, Chang Son fans were famous at home and abroad. The French have repeatedly brought Chang Son fans to the Paris exhibition. The names of artists: Duong Van Mo, Nguyen Duc Lan, Nguyen Lan Tuyet … in the village no one is unknown. In 2008, artist Duong Van Mo and Phi Quang Bo made the biggest record fan in Vietnam. 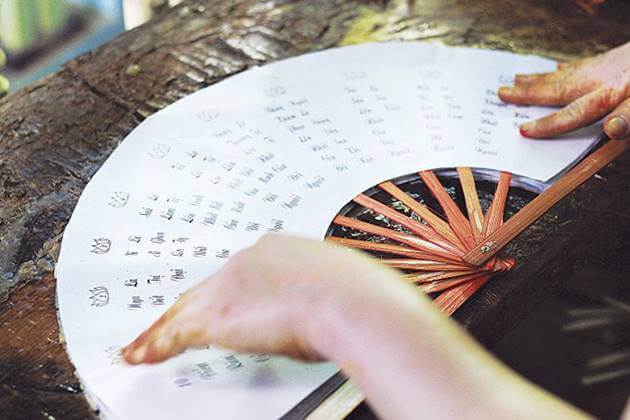 Chang Son paper fan is very diverse in color and material. Not just make the paper fan, but the Chang Son people also produce all kinds of fans such as silk fans, wall decorating fans, fans for wedding invitations, and high-end fans as souvenirs. Chang Son fan is not only of artistic value but also has a fanciful history and culture, as each fan art depicts the country’s famous landscapes and ancient stories, poems, parallel sentences, …
Chang Son paper fans have been exported to many countries in the world such as England, France, Germany, Japan, Korea. The paper fan making not only brings more income to the villagers but also contributes to preserving and promoting the tradition of a long-standing craft village. The fans are not just to cool off on the summer days, but also contain the message of deep humanity, contributing to the promotion of Vietnamese culture to international friends. Perhaps that is one of the reasons why Chang Son has become a traditional craft village in Vietnam that has received a lot of attention from visitors on the Hanoi tours.