For centuries blacksmiths from Da Sy Village, a traditional village in Hanoi, have been hammering out quality metal products that are famous country-wide. From early morning ‘til late afternoon, the sounds of steel and iron being beaten with hammers resound throughout Da Sy Village, as it has for 400 years or more. The village outside Ha Noi City is famous for its metalware. The name is known throughout Viet Nam. The first impression one gets when entering Da Sy Village is a rush of excitement at the sounds of hard work and enthusiasm – a chorus of hammering on family anvils.

In the showroom of the Da Sy Association of Traditional Forgers, villagers often sit around telling historical stories about the village and different ways of production. Visitors can also see the metal being beaten into knives, scissors, sickles, hoes, spades and other farm and garden tools.
The village is one of the best places in the nation to see blacksmithing practices that go back nearly 3,000 years to the beginning of the Iron Age in Viet Nam, even further if one takes in the renowned bronze culture of the Dong Son period from which the ironwork evolved.
Da Sy knives and scissors can be found throughout Viet Nam. Even merchants from Laos and Cambodia put in regular orders. The village, formerly known as Ke Se Village, is in Kien Hung Ward in Ha Dong District. It is one of the many craft villages conserved by the Government. 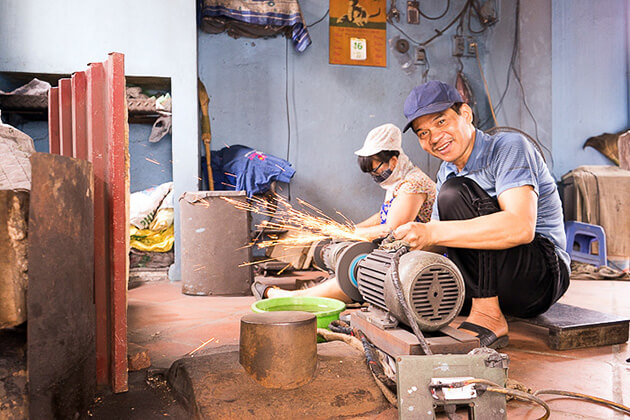 Da Sy villagers are proud of their homeland for many reasons. Apart from the traditional forging trade passed from generation to generation, it is also well known for many successful doctors, some of them famous. That is the reason why the name was changed to Da Sy (Many Doctors).
According to the late Professor Tran Quoc Vuong, metal forgers from the Dong Son cultural region, of which today’s Da Sy Village can be included, provided the Hung founding kings with the weapons to protect his country, then it’s known as Van Lang, against huge armies of northern invaders. This means that Da Sy’s blacksmiths can probably claim a direct connection with the founding kings of Viet Nam – and gives their work a historic edge few other towns or cities in Asia can claim. 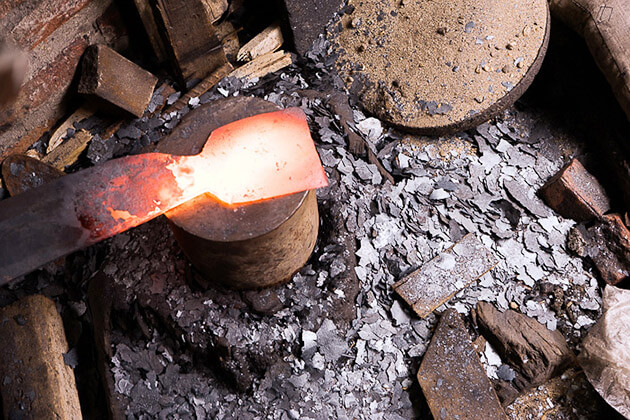 Weapons made in the village have also been used in the battles for liberation in the 19th and 20th centuries, giving their work extra cachet. When peace returned to Viet Nam 40 years ago, the Da Sy people returned to making to agricultural implements such as plows, rakes and machinery parts or kitchen implements.
According to local historians, the present village rose to prominence under two blacksmith ancestors, Nguyen Thuat and Nguyen Thuan, several hundred years ago. They arrived from Thanh Hoa Province, which adds further substance to Professor Vuong’s theories.

Today’s Da Sy’s knives and choppers are still renowned for being hard wearing and able to retain a hard and sharp cutting edge. Although mass-produced factory tools have flooded the market in recent decades, Da Sy people are full of confidence about their products and their future. Furthermore, the designs of the hand-made village products are much more varied and individualistic. About 100 types of knives and more than 10 types of scissors are made in Da Sy Village. 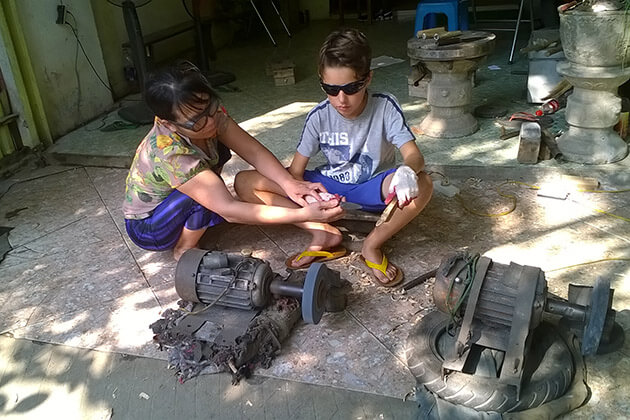 According to the head of the Da Sy Association of Metal Forgers, Le Thanh Yen, the work is hard and includes many complex processes, such as making rough drafts, keeping the fire burning, hitting red-hot iron into shape with hammers, strengthening the hot metal with water – and then sharpening the final product.

How to Get Da Sy Forging Village

Da Sy Village is situated in Kien Hung, Ha Dong, Hanoi, it’s quite close to the center of Hanoi. Thus, forging village is easy to reach. To get the forging village of Da Sy, you can take a taxi (just about $5), or jump into the local bus to get there.
If you have an intention to visit on your own, you should visit in the morning since it’s time to take place a lot of activities. 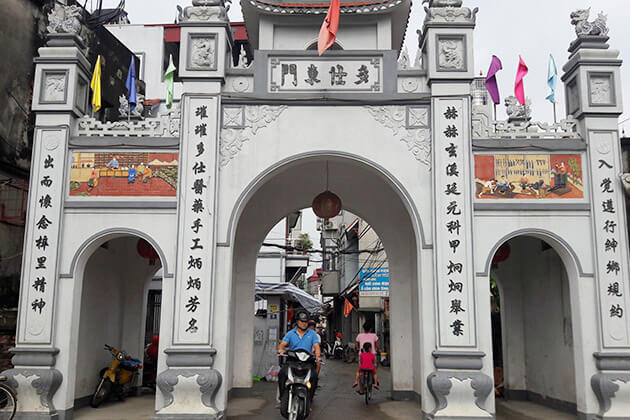 Besides a simple visiting in the forging village of Da Sy, you can also join in a knife making class right at the village, and your teacher is the local blacksmith resident of the village who has a two-third life doing this work. 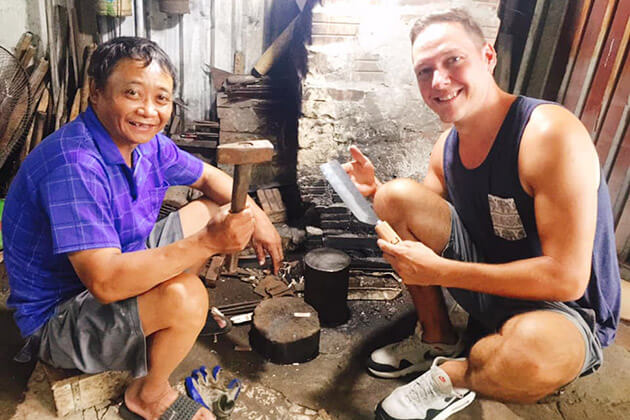 Experience your first-hand how to forge the handmade knife from scrap metal to finished using traditional methods surely satisfies you. For the most convenient, contact us to speak 1-1 with our travel advisor for more information.