When the autumn comes, it goes along with the elegant aroma of a favorite type of long grain snacks which enchants the soul of Hanoians as well as many pilgrims living in Hanoi. This snack is made from young sticky rice, collected at the end of the summer. Green sticky rice or originally called Com has been sold in every street of Hanoi, but have you been curious about where Com is originated? Com or green sticky rice comes from Vong Village in Dich Vong Ward, Cau Giay District, Hanoi. Vong green sticky rice is flat with light leafy green and rich aroma. Follow us to explore this special gift from nature.

Nobody knows how long the green sticky making tradition has been in Vong village. Actually, a legend tells that a thousand years ago, there was an overflowing rain with severe winds in Vong village, on the suburb of present-day Hanoi. At that time, the heavy storm threatened while the paddy was just about to ripen, which may lead to a big loss. Therefore, the Vong villagers had to collect and dry the young rice to avoid starvation. However, the alternative product had a distinct flavor and its fragrance, that is why the villagers repeated that process in later years. The fame of the alternative food from young rice flew further and further, thus, that food was sought after by the gourmets and became one of the tributes of Vong village to King of the Ly Dynasty (11th – 13th century), and it was called green sticky rice or Com in Vietnamese. 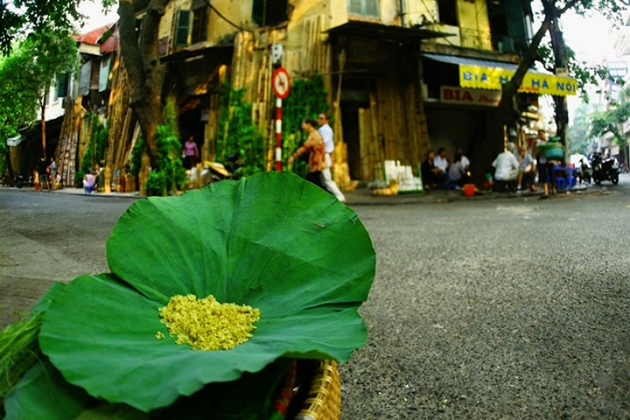 How to Make “Com”

Green sticky rice is initially made from young glutinous rice when the sticky rice begins to mature and still contains milk and fragrance. The pounding and drying techniques are the skill that has been kept generation to generation but it’s never transferred to females.
The process of making the green sticky rice is quite complicated. Right after harvesting the green rice, they have to pass several preliminary processing, then roast at the appropriate temperature to make the scrumptious and flexible Com. For the connoisseurs, they can easily figure out three types of ingredient to make the best Com:
– Com made from rice in the early season is thinner, softer and more flexible, which is suitable for vegetarian or should eat with banana.
– Com from the mid-season, the seed is more mature, so it’s often used to make fried nuggets.
– At the end of the season, the seed is larger, thicker and it’s slightly hard to eat, just suitable for cooking or sticky rice. 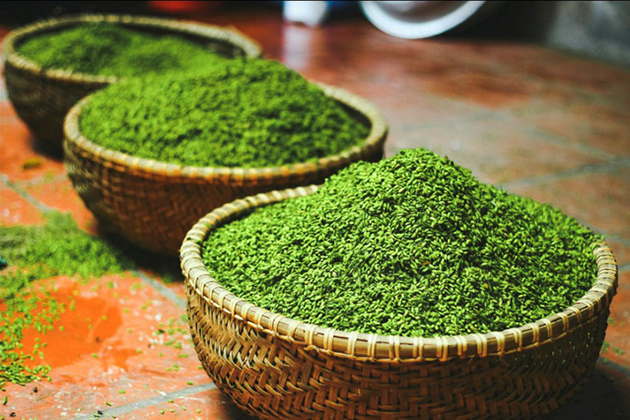 How To Enjoy Com Properly?

Com is often eaten by hand from the lotus leaves, chewed slowly to enjoy the flavor. It can be eaten with persimmons or bananas, it can also use as the ingredient for Com Cake, Che Com (sugary soup with Com), Cha Com. Especially, Banh Com is the most famous as it’s used at almost every engagement ceremony, which can be seen as the symbol of everlasting love.
Hanoi connoisseurs will know to enjoy Com Vong with sips of green tea from Thai Nguyen. Com Vong is a traditional snack of the local Hanoi since the old days which is wrapped in lotus leaves, old lotus leaf helps it maintain the pure flavor of Com Vong, and it will be tied with golden straw to prevent being dried out. For many families in Hanoi, Com has seen as a big part of Vietnamese traditional wedding and also the special gifts for the elder like a sign of respect and longevity. 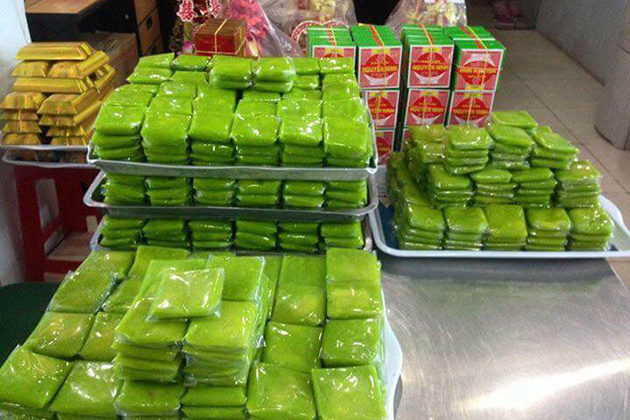 How To Get Vong Village

Vong Village, a traditional village with the craft of making green sticky rice or Com, is located in Cau Giay, it takes 7 kilometers from Hanoi center. Com is one of the ancient villages which has been well preserved and developed from the past until now, even with the advance of technology.