From the dim of history, people have used ceramic to decorate houses, social constructions,… and the art of using ceramic have been popular by its endurance. However, the idea of using ceramic to create a mosaic mural seems as impossible, but it became true, and as we can see today a Hanoi Ceramic Mosaic Mural, the largest ceramic mosaic in the world. Hanoi ceramic mosaic mural is the first public collective artwork in Vietnam, they were found on the wall of the dike system in Hanoi. This public artwork reflects Vietnamese culture as well as history a lot, follow us to explore this cultural construction in Hanoi, Vietnam. Follow Hanoi Local Tour to get a deep understanding of Hanoi Ceramic Mosaic Mural.

This “crazy idea” of Nguyen Thu Thuy, a journalist of culture and arts was conceived in the idea of transforming Hanoi’s dike system into a cultural carpet instead of the grey boring concrete dike. Although the dike is believed to be 800 years old to protect Hanoians from floods, it is now truly an excellent work of art, taking advantage of Vietnam’s rich history and that Hanoi Ceramic Mosaic Mural is the brainchild of the wonderfully eclectic contemporary times.
After a long time embracing this dream, Ms. Thuy turned it into reality by many practical steps, she started by presenting her project using Photoshop images at the Hanoi Embellishment Exhibition in March 2007, and of course, the project was received enthusiastically. After that, she launched the New Hanoi Arts organization, together with her partner, to oversee the implementation of the project. 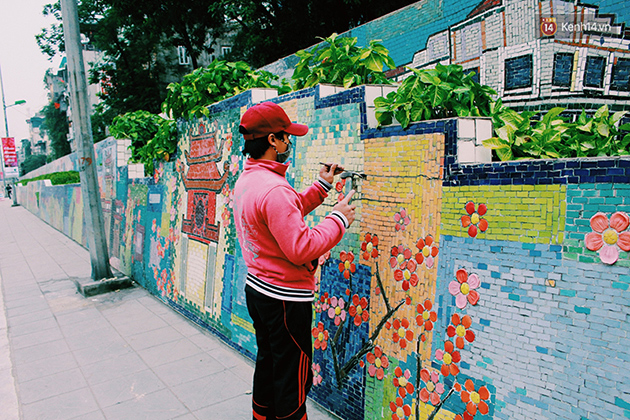 Just take a glance at the new appearance of Hanoi, we can see the difference before and after the ceramic mosaic mural was conceived. Actually, Vietnam is still an impoverished country, thus we cannot invest too much in public art, and the creative mural can be seen as the cornerstone in the development of Vietnam. The international nature of the ceramic mosaic wall strongly implies creativity and art as a mark of connection rather than seclusion and fear of what is different, which all have been overcome by the Vietnamese. 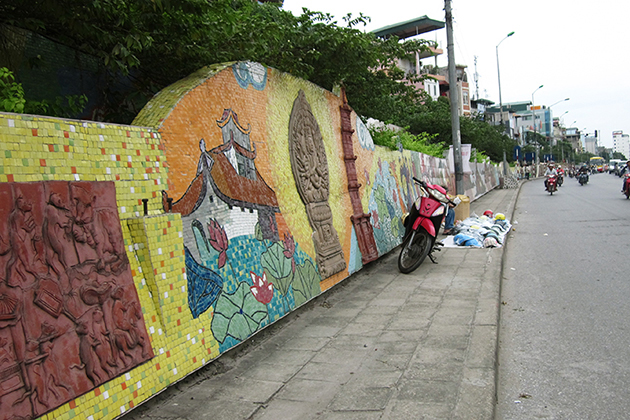 The mural itself was used ceramic tesserae, a type of tile used in the mosaic which is made from the Bat Trang village. The Hanoi ceramic mosaic mural is divided into 21 sections and portrays of the different decorating styles throughout the flow of Vietnamese history, which have considered as a visual narrative of country’s history and harmonized to fit Vietnam’s eclectic cultural identity.
The Hanoi Ceramic wall was built in-line with the 1000th anniversary of the foundation of Thang Long in October 2010. The ceramic mosaic mural represents the decorative pattern from different periods in the long historic flow, such as Phung Nguyen and Dong Son culture, the myriad of the dynasty as Ly, Tran, Le, Nguyen. Also incorporated on the wall follow the traditional architectural designs of Vietnam’s 54 ethnic groups, performed by modern delicate artworks and paintings of Hanoi and children’s drawings also. Organizationally, part of the ceramic mural drawn by children were:
Part A1: a mural of the historical period from the era of Dong Son to dynasties of Ly, Tran, Nguyen, Le.
Part A2: a mural of 54 ethnic groups of Vietnam.
Part A3: the theme of a peaceful Hanoi inspired children’s drawings.
Part A4 to A9: Performance of modern arts of Vietnamese and foreign artists.

Instead of the tedious road-trip along the Red River, people can travel with joy and contentment while looking at the well-designed walls on the road. The mural not only reflects the Vietnamese culture, but it also reflects the hope for a better future, therefore, this channel fence stands out and inspires for its spectators. Tourists are allowed to delve into a different view, biking or strolling along to think about the past and the image of the future without noticing the inescapable urban decay.
Obviously, we can recognize that the technique of mosaic has been the best evidence for the project, as it has an ability to connect many crucial things – the tradition of local ceramics, excellent durability and exceptional expressive potential. The Hanoians nowadays can look forward to having a vibrant decoration in the capital in the place where was once vandalized and boring.