Mid-Autumn Festival- according to the lunar calendar is the full moon day of August every year. This is a children’s day according to the Vietnamese perspective, also known as a “Holiday looking at the moon” 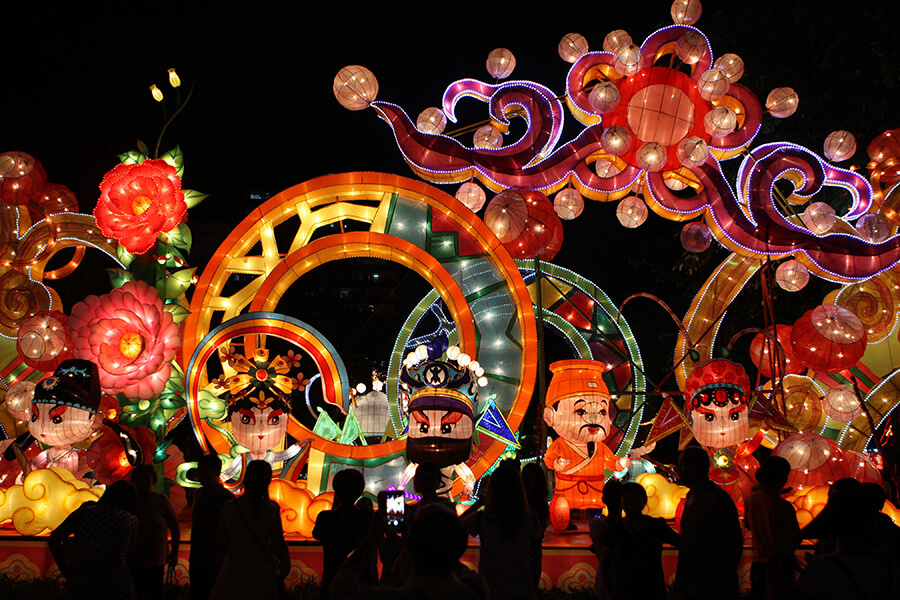 It can be said that China is the place where the Mid-Autumn Festival originated, and then influenced the whole of Asia, although each country then made different changes to suit the culture of each country…

Different cultures make different Mid-Autumn Festivals in countries around the world, creating diversity, but still a ceremony to pray for the fullness of the moon. 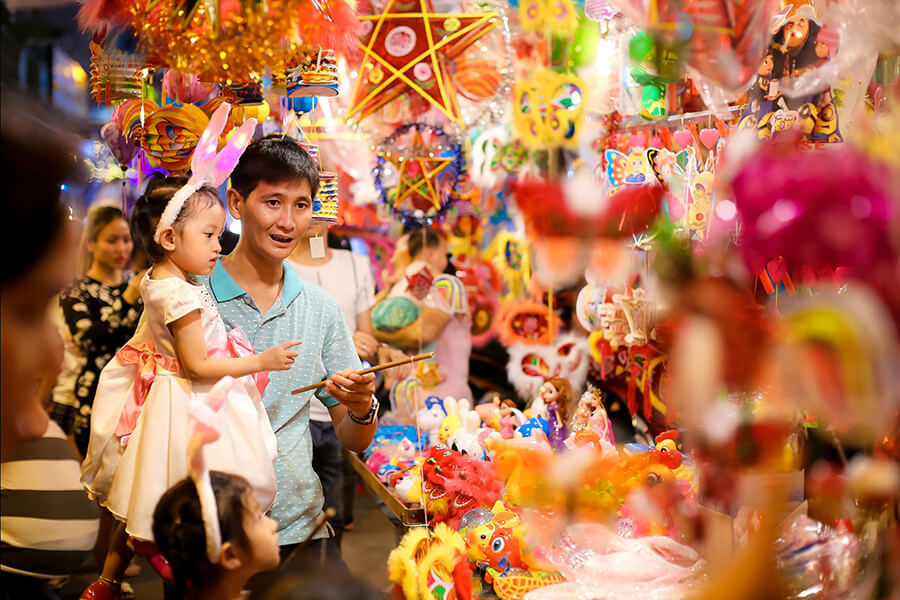 Not only has the meaning of union, but Mid-Autumn Festival is also a holiday for Vietnamese children. This is the occasion when the children will be given traditional toys by their parents such as star lights, army pull lights, etc., and they will process the lights together when the moon rises. When the moon is very high, everyone breaks the feast together, singing and dancing under the moonlight. 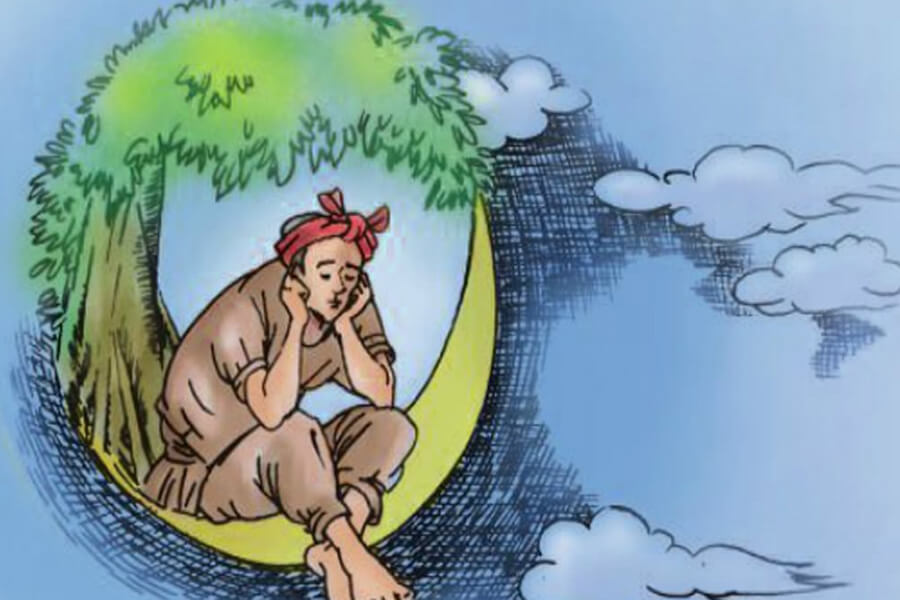 Once upon a time, there was a woodcutter named Cuoi. One day Cuoi went to the forest, and suddenly met a tiger cub rushing up. Unable to avoid it, he had to risk his life to swing his ax to fight the tiger. The tiger was young, so he lost to human strength, was cut by Cuoi with an ax, and rolled to the ground. Just then, the mother tiger arrived. Cuoi just had time to throw the ax and climb up the tree. Looking down from above, Cuoi saw the mother tiger running to a nearby bush, grabbing a few leaves to chew for her baby. After a few minutes, the tiger cub naturally stirred, wagged its tail, and came back to life. Waiting for the mother tiger to take her cubs to another place, Cuoi went to the other bush, dug the root, and brought it back.

Since having a precious medicinal plant, Cuoi has saved many lives. Once, Cuoi saved the daughter of a rich man and married her. Cuoi and his wife live together very peacefully. But once, Cuoi’s wife slipped and fell, breaking her head, Cuoi covered her with medical leaves but she didn’t wake up. Loving his wife, Cuoi tried to mold his wife’s earthen brain and then re-applied it. Unexpectedly, Cuoi’s wife came back to life. But since then, the wife suffers from amnesia.

Today, when we look up at the moon, we still see Uncle Cuoi sitting under a precious medicinal tree..

Mid-Autumn Festival is on August 15 (lunar calendar) every year because on this day the moon is the roundest and brightest. Besides, at this time, the harvest season has also been completed and festivals have been started, in the typical full moon festival.

According to the 2022 calendar, this year’s Mid-Autumn Festival (August 15 of the lunar calendar) will fall on Saturday – September 10, 2022 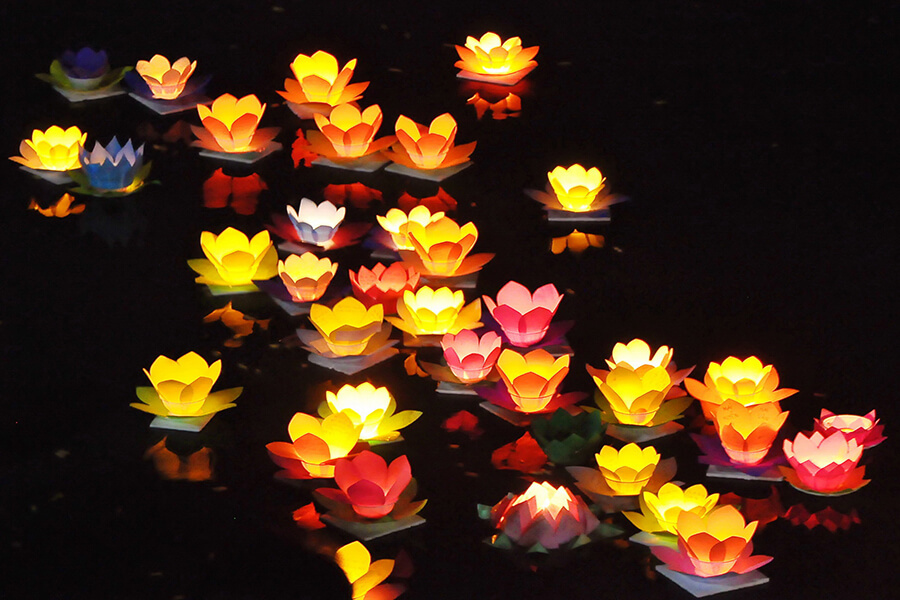 as a way to send a message to their loved ones on the other side of the world having the same Tet Doan Vien. People can drop lantern in the sky or river, this activities usually take place at night, when the lanterns became more colors full and brilliant 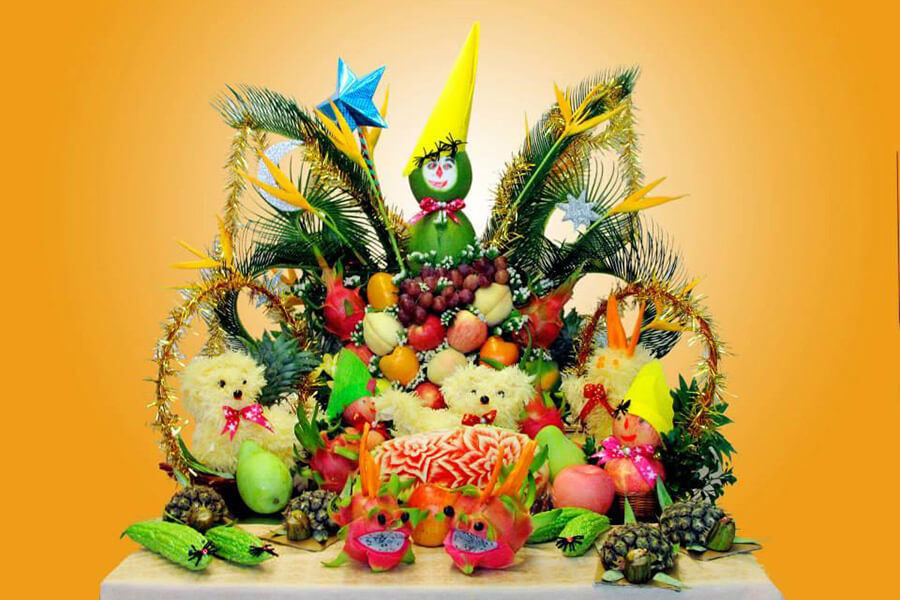 According to Vietnamese custom, on this day, families prepare a tray to worship the moon, including 5 kinds of fruits and a pair of Baked Moon cakes and Sticky Rice Moon cakes. Just like “Banh Chung” and ”Banh Day“on the Lunar New Year, Moon Cake also symbolizes reunion, the crust wrapped around the filling cake shows solidarity and attachment. The square cake represents the earth, and the round cake represents the sky. The philosophy of the harmony between heaven and earth and the attachment of all things is expressed in Mooncakes, dedicated to heaven, earth, and ancestors. 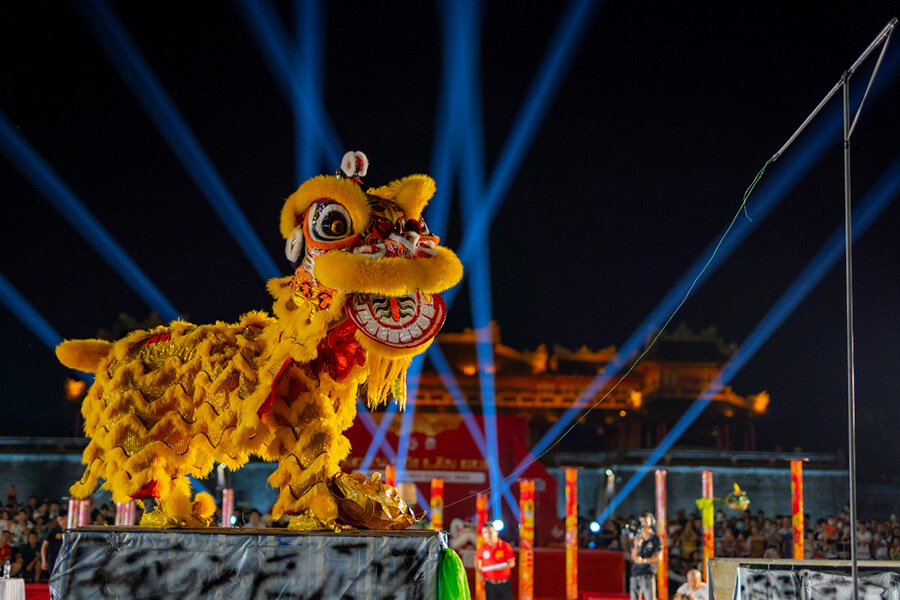 The tone colors of the Lion will usually be yellow and red, these are the two colors symbolizing well-being and happiness. Lion dance activities often create an atmosphere of joy, excitement, and laughter for children, contributing to bringing joyful, exciting, and refreshing moments.

In the lion dance team, there is one person standing in front in charge of the lion’s head and the other person holding the fabric in charge of creating the lion’s back body, both people must coordinate rhythmically swaying so that every movement of the unicorn becomes vivid, beautiful, the most realistic and at the same time can still coordinate to the beat of the drum. There is also a character that will hold a fan and wave it back and forth to tease the unicorn. To add to the attractiveness of the lion dance performance, people also combine colored Lanterns, drums, firecrackers, trumpets, etc. The crowd stands behind Lion and children are cheering, along with colorful lanterns. disguised faces make this activity became brilliant and interesting.

The Custom Of Bai Nguyet 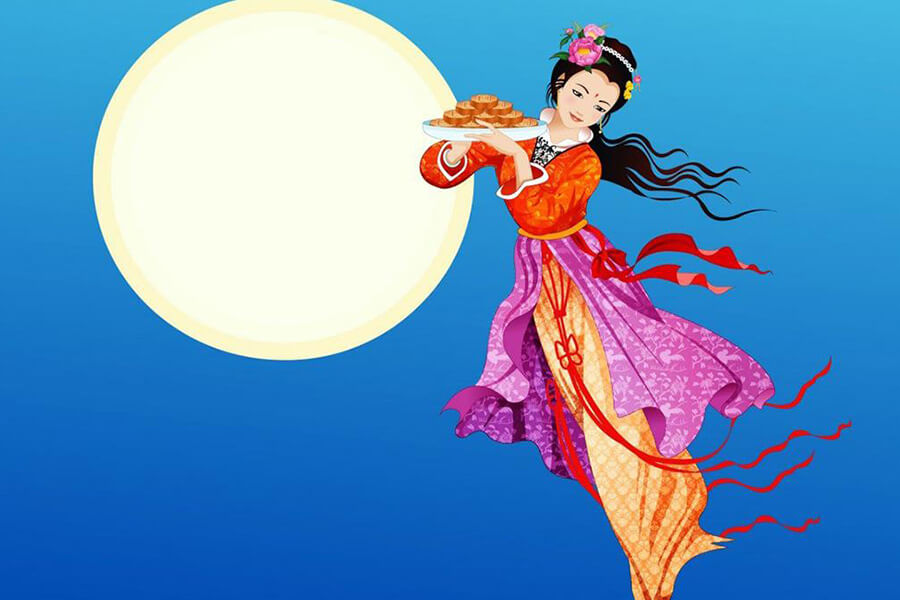 In folk belief, Nguyet Than is the god of family, love, and happiness, representing a woman, a gentle mother, for reproduction and maintenance of life. Therefore, the full moon day of August every year – the brightest and biggest moon day of the year is chosen as the Mid-Autumn Festival to organize festivals as well as worship the Moon God to pray for a bountiful harvest. The festival is an opportunity for farmers to have fun and rest after hard working days. At the same time, it is also an occasion to sacrifice to heaven to pray for good luck, to pray for favorable weather, and peace. 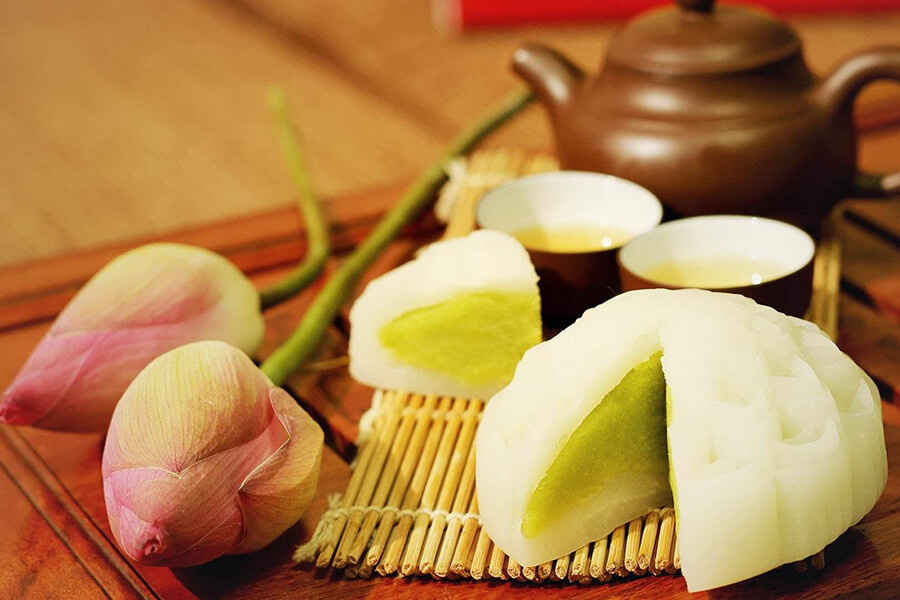 Traditionally, mooncakes are made with the crust of finely ground roasted glutinous rice flour, sugar water (do not use malt as Baked Mooncakes), and grapefruit perfume. The filling is made from sausage, lard, pumpkin jam, and some typical nuts creating traditional filling ingredients. The cake is molded after being molded and can be used immediately without needing to be in the oven. 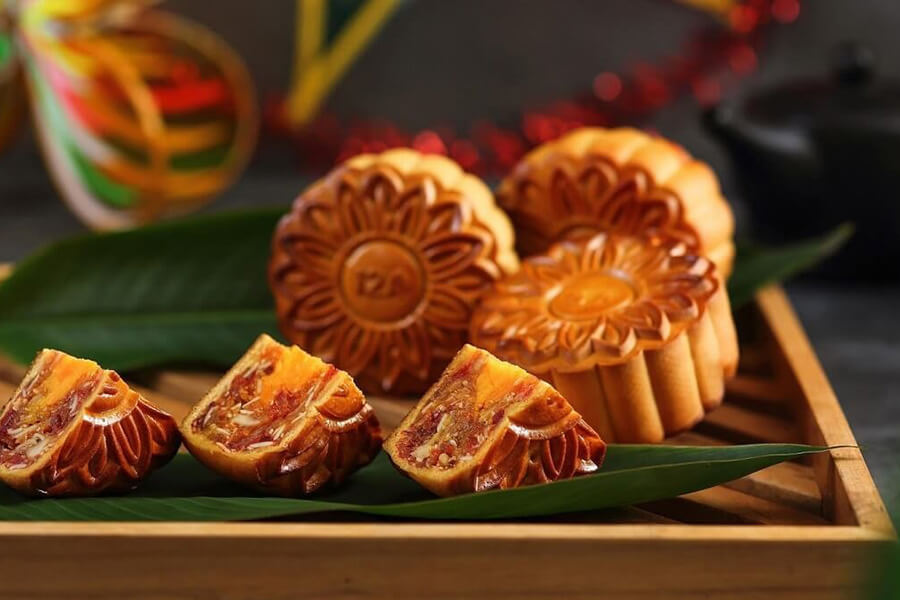 Baked Mooncakes are made with a crust of flour and a little cooking oil. Sugar to be mixed into the crust is usually cooked with malt to turn amber and leave for as long as possible and store carefully until the next season to use. In the past, in Vietnam, the filling for pies was usually mixed, with a few lime leaves, fatty meat, jam, melon seeds, and sausages. Grilled is recently varied with green bean filling, red bean paste, salted egg, … 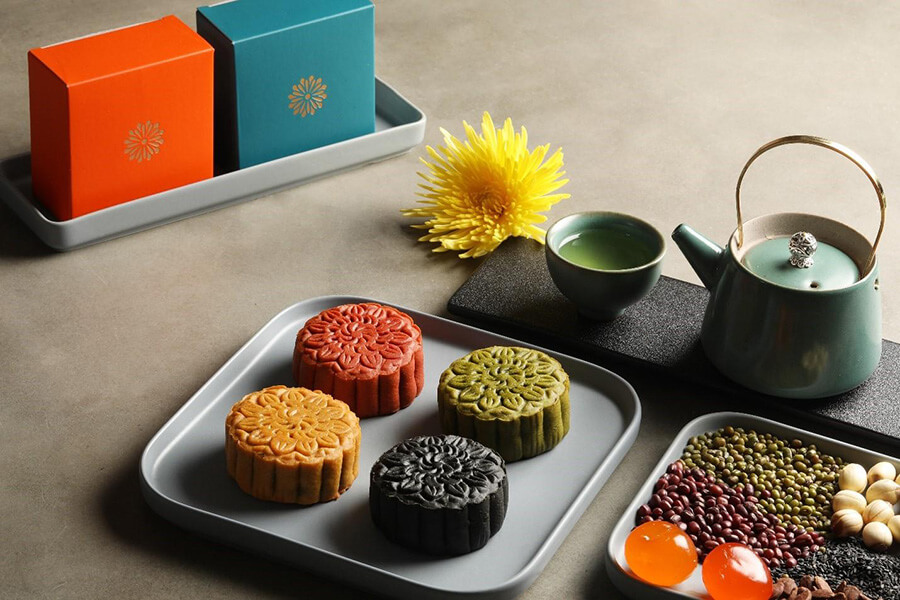 Vietnamese people habitually drink a cup of tea when eating mooncakes. The simplest reason is that after eating a piece of sweet cake, people don’t seem to satisfy their taste buds. Drinking tea at first thought to soften the taste of the cake, but in fact, the tea has a sweet aftertaste, it prolongs the delicious taste of the original cake. Perhaps that is why there are few drinks that can replace hot tea in the art of using moon cakes. 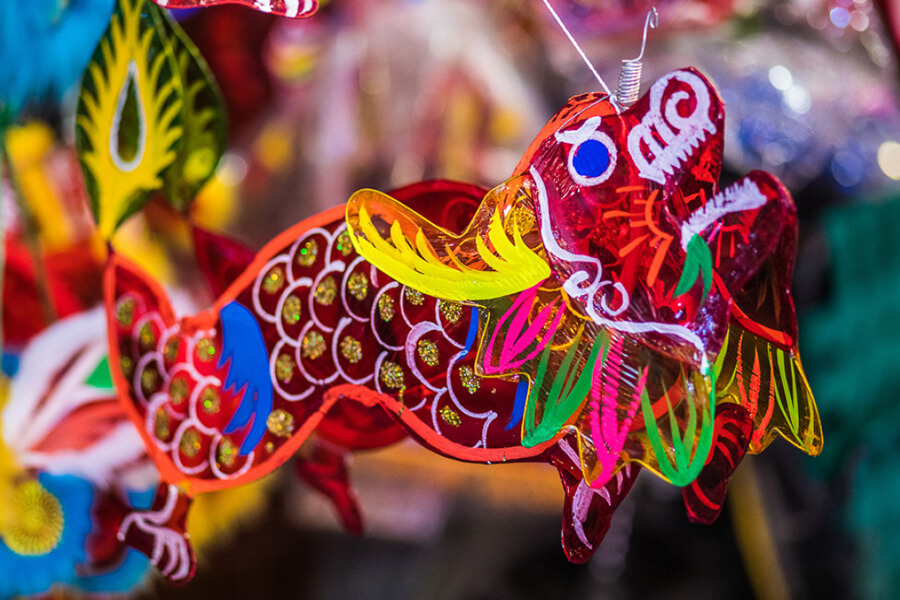 The lantern has special meaning in this Mid-Autumn festival. Not only a children’s toy, but Lanterns also brought the wishes of Vietnamese people about heaven and earth.

The image of a 5-pointed star surrounded by a circle symbolizes the five elements of yin and yang in feng shui, so this lantern symbolizes the balance and harmony of relationships in life, between people and people with nature. 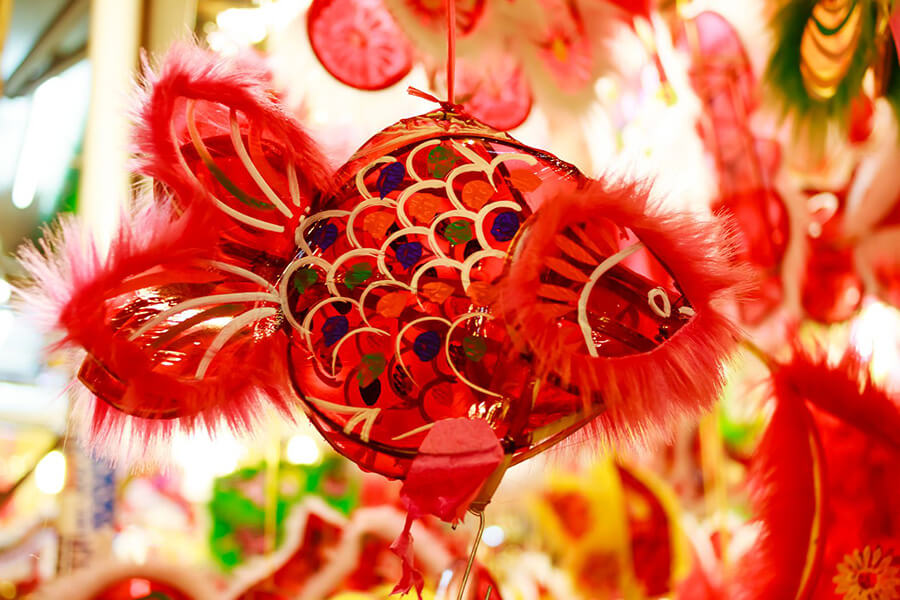 Carp appear in the legend of crossing the dance floor to turn into a dragon, which is the means to bring the god “Tao” to heaven on the 28th day of every lunar new year,…The meaning of this Mid-Autumn lantern is a symbol of constant efforts and overcoming difficulties in all circumstances. 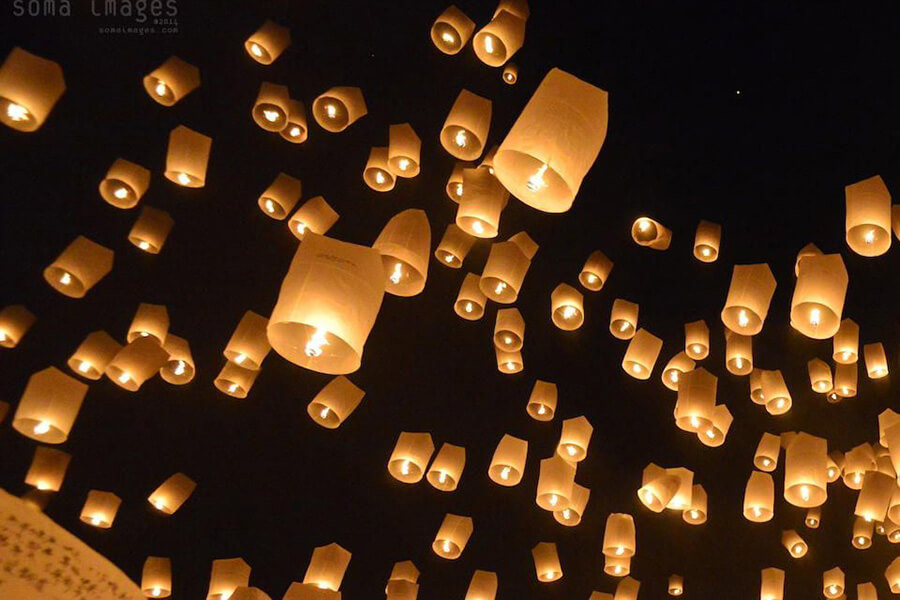 Originating from China, this lantern is associated with the idea of ​​​​remembering King Luc Duc, a man who was both skillful in strategy and rich in filial piety in Chinese society at that time.

The meaning of this Mid-Autumn Festival lamp symbolizes the filial piety and love of children for their parents and grandparents. 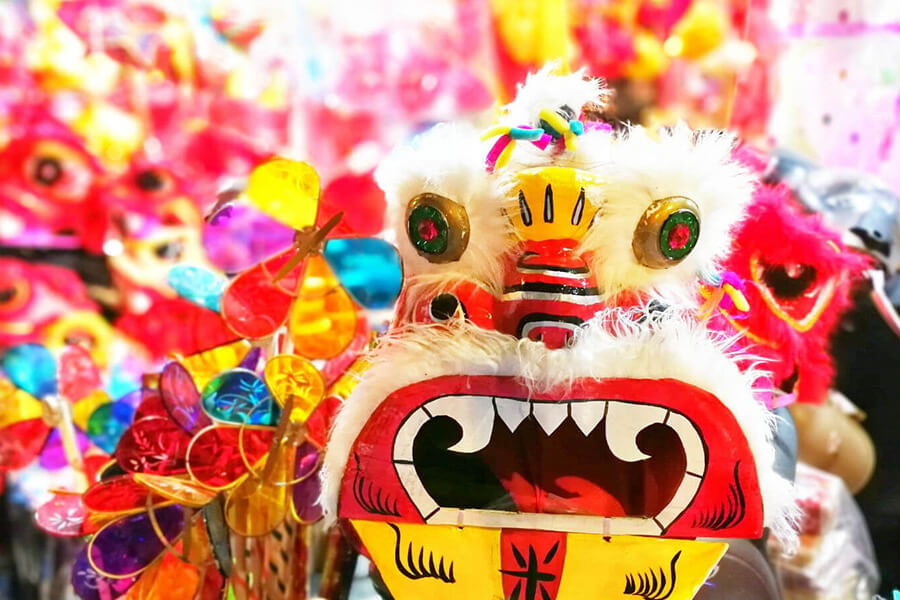 The image of “lion” is a wish for prosperity for the remaining months of the year, as well as bringing a bustling, joyful atmosphere to the child. “Lion” is also an image representing the traditional way of celebrating major holidays of the Vietnamese people 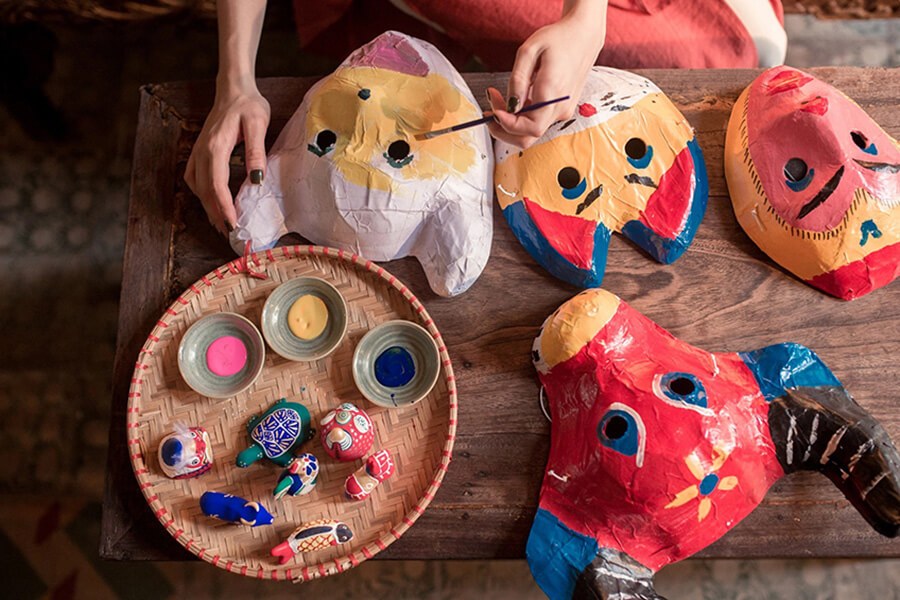 Previously, the paper mask market was “overshadowed” by people who loved the convenience and cheap price of Chinese plastic masks. However, in recent years, parents want to educate their children about their roots. So they tend to buy folk toys such as To He, paper lanterns, paper masks, etc.

Not only bringing joy to children, but these masks are also a tool for adults to convey to children the beauty of national culture.