Disguised amidst the hectic, cramped streets of the Hanoi Old Quater lies a funky little area, where motorbikes or even cars are no longer the biggest danger to locals stepping outside of their front door. They’re now replaced by high-speed trains, hurling through the residential street, just only feet away from people everyday lives including their dishes and laundry drying by the tracks, which all define the Hanoi Train Street.

The train street certainly came into tourists’ curiosity via many social network channels, that is the reason urging tourists on the Hanoi Tours to hunt for it. The street is not dissimilar to the majority of the streets in Hanoi’s Old Quater are mixed from the slim, tall buildings with the bustling and narrow streets. However, tourists can easily find the differences between, that us a working railway track filling up space where the road should be. It is quite eerie as seeing the locals’ daily lives. 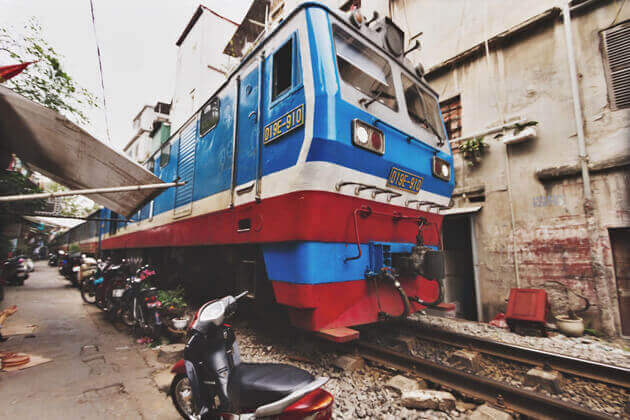 Where to See Hanoi Train Street

Hanoi has many ways leading to the train streets, but we opted to watch the train pass from a slice of the street nearest the Old Quater thus tourists could walk there. The train street lies on a narrow street between Kham Thien and Le Duan, exactly the lane passing along called Ngo 224 Le Duan. From Hanoi Old Quater, it takes about 35-40 minutes to walk at a decent speed. In addition, you can try “xe om” to get a ride there.

When to See Hanoi Train Street

There has two trains that run along this route daily, one at 3:30 pm and another one at 7:30 pm. To gain the best photograph, we choose the train at 3:30 pm for the daylight. It is conspicuous that to be safe, travelers should observe carefully to find a safe spot to watch from and a good view. The train usually comes from the South to the North, so you can decide where to watch from.

Best Things to Do & See in Hanoi Train Street

Enjoy Food & Drink on the Tracks!

There stands available coffee shops for those who are getting thirsty, named The Railway Cafe, located on the side of the train tracks. This is the best view ever to see the train where you can find a few chairs outside to meet other on-lookers. Besides the cafe, the train street has some places selling food, and fast food also. Therefore, you can grab a quick bite to eat or drink, right then watching the train pass. 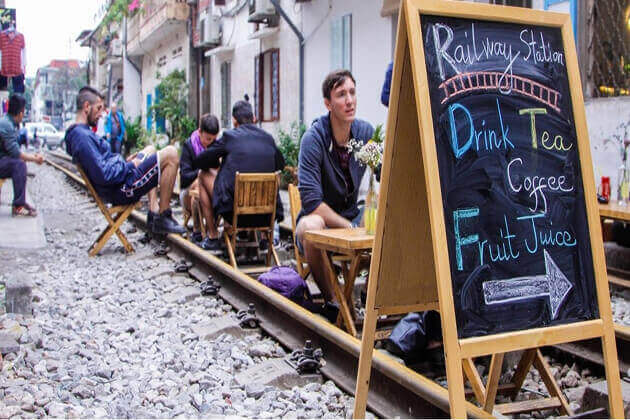 Life beside the tracks with local has no difference. The railway becomes their silent neighbor while the trains are “noisy guys”. It seems misfortune for these Hanoians when they have to live in such a dangerous place but throughout years getting used to it, this street is so special to them and even an important part in their life. Talk to them, spend time with them and these moments will leave you unforgettable memories. 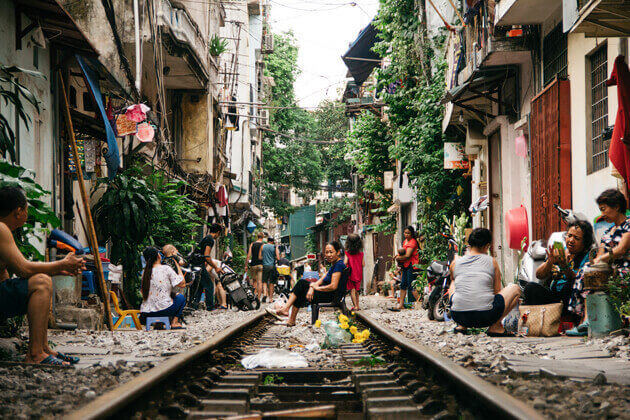