Van Mieu – Quoc Tu Giam (known as Temple of Literature) is on top of the historical and wonderful sites of the beautiful capital Hanoi. The attraction mainly draws tourists’ interest for its being a Temple of Confucius and hosting the Imperial Academy – Vietnam’s first national university.

History of Temple of Literature

Back to the history, Van Mieu or Temple of Literature was built in 1070 during the Ly Dynasty with the first intention to be a Confucius temple. At that time, the entrance was only granted to those of noble birth. Not until 1706 did the Temple became Vietnam’s first university, and until 1442 a more egalitarian approach was taken and talented students all over the country were welcomed to study the principles of Confucianism, literature, and poetry. Date to 1484, steles were erected here to record the names, places of birth and achievements of exceptional scholars at the time of Ly Thanh Tong. Of all 116 historical steles, 82 remain standing today for visitors to closely witness. The university functioned for more than 700 years, from 1076 to 1779, during that time 2,313 doctors graduated. Therefore, the complex has been borne the name Van Mieu – Quoc Tu Giam (Temple of Literature) up to the present. 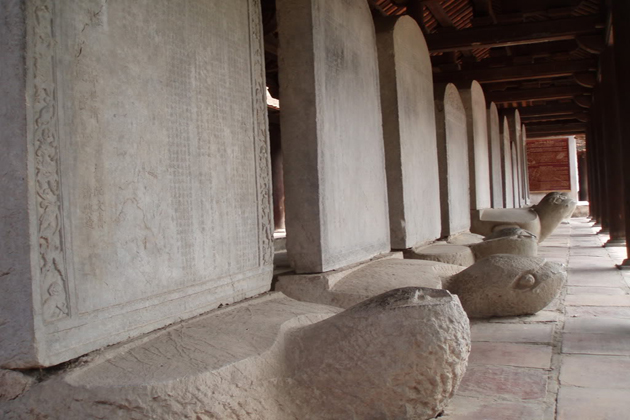 Architecture of Temple of Literature

Beside the high historical value, the temple also finds its prestige for being an outstanding beauty-spot of architectural values. It occupies a total area of over 54000 square meters, including the Van lake, Giam Park and the interior courtyards surrounded by a brick wall. The ever special architectural style of Van Mieu which was based on the birthplace of Confucius at Qufu, Shandong province, China comprises five courtyards lined out in order.

The first two courtyards were ideal places for scholars to stay away from the busy of study and city life outside. There were full of trees and well-trimmed green lawns which make these sites become peaceful heaven of relaxation. 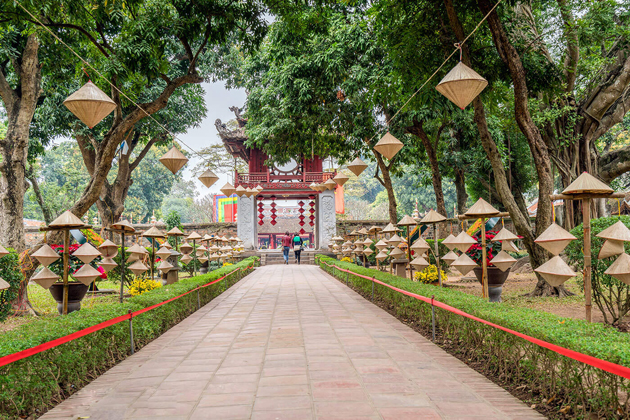 Passing the dominating Khue Van Cac (constellation of literature), a large pavilion built in 1802, tourists get to the third courtyard, the center of which locates the Thien Quang Tinh (Well Of Heavenly Clarity) and its two sides stand two great halls which house the true treasures of the temple:  82 stone steles. Each stele was placed upon a stone tortoise, and hold names and birthplaces of 1306 exceptional scholars who were awarded doctorates from the triennial examinations held here at the Quoc Tu Giam (“National University”) from 1484 to 1780.

Either side of the fourth courtyards is huge pavilions which in the past contained alters of 72 of Confucius greatest students. Now, these places consist of offices, a gift shop and a small museum where inkwells, pens, books and some other personal artifacts of several students having studied here through the years are displayed. The altar with statues of Confucius and his four closest disciples are located here at the far end of the fourth courtyard. 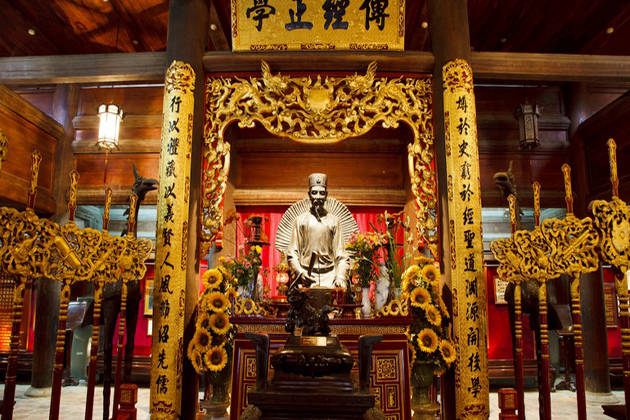 Last but not least is the above mentioned Quoc Tu Giam, Vietnam’s first national university which is situated in the fifth courtyard. It was founded in 1076 during the reign of King Ly Can Duc but was then destroyed in 1947 by French bombing. What visitors see today is the reconstruction of the fifth courtyard on grounds of the original “Imperial Academy”.